In mid afternoon we learned that a Le Conte’s Sparrow had been seen at Milford Point. We decided to go for it anyway. Tom Sayers confirmed by phone that it was being seen as we left Norwalk in rush hour on I95. Despite the odds it seemed worth the run and we would perhaps have an hour or more of light once we got there.

We piled out of the vehicle at Milford Point, assembled our gear and marched towards the boardwalk overlooking the sand bars. We saw a group of birders/photographers in the distance who were standing around with that conversational grouping that clearly says the bird in not in sight just now. The famous line, “the bird flew into the dunes from the salt-marsh when the tide pushed him out a little while ago and has not been relocated” was soon heard when we reached the group. So we bird and chat and search and otherwise pass the time that would be better spent watching the bird which was not there….

Birders and photographers started peeling off. Tom Sayers who found and photographed the bird advised all, to come back tomorrow at dawn as it seemed to be hanging around, as he left. Finally it was just Frank Mantlik, Paul Fusco, Sara Zagorski., Mardi and me left and we kept looking.

Just before sunset, the ever vigilant Sara re-found the Le Conte’s and called us over. It was 20 feet away and very, very hard to see, but we all saw finally it and I managed a few photos in the adverse conditions of failing light. As you can see the bird was constantly foraging and eating spartina seeds, in fact the marsh grass was dripping with seeds, a sparrow paradise. The last view of the Le Conte’s Sparrow was seen by Mardi at 6:02pm Friday night.

Luke Tiller blew in to the parking lot at late dusk as we were leaving. We had fashioned an arrow marker of spartina grass on the beach at the point of our last sighting for him. We hope he and his buddy got it. 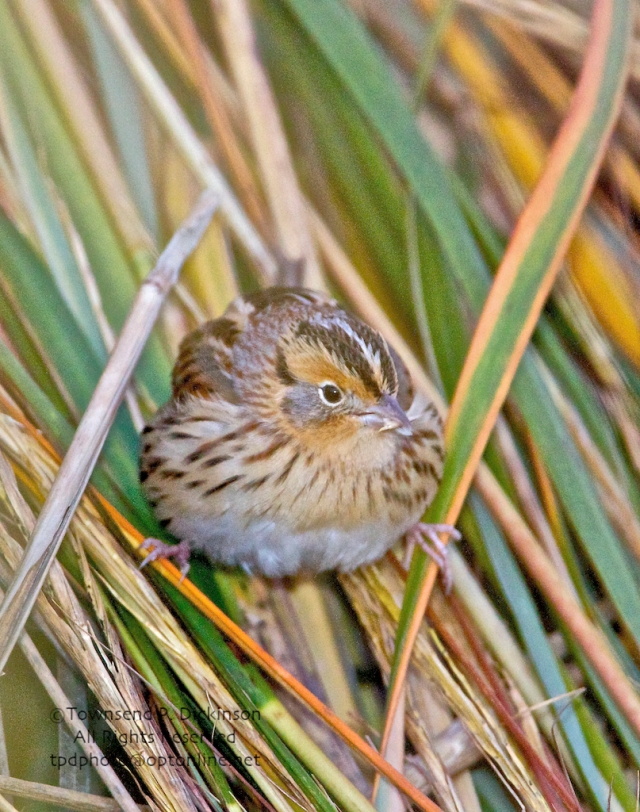 Welcome to the KymryGroup™. We will be showcasing photography by several different photographers with a look in time from 1922 to the present. Share Business, Marketing, Technology of Photography. Including adventures in the birding world and many other interesting insights and observations along the way.
View all posts by Kymry →
This entry was posted in Birding and tagged Le Conte's Sparrow, Le Conte's Sparrow photos, Sparrows, Townsend P. Dickinson. Bookmark the permalink.