I am very disturbed by what continues to develop in one of my beloved areas of the birding world. It is my deep concern that lead me to post this press release. We can all spread the word loudly and help our friends in NW Ohio fight this serious problem.

Northwest Ohio is an important bird migration flyway that is a crucial stop over for millions of migrating birds to feed, rest and refuel to continue there long journey to their nesting grounds or the reverse commute back home for the winter.  If this problem on WRONG LOCATION of Wind Turbines in Northwest Ohio continues to be ignored, we may never see any migrating birds ever again.  This would be a monumental disaster! ~ Mardi Welch Dickinson

Washington, D.C., (March 3, 2014) American Bird Conservancy (ABC) and Black Swamp Bird Observatory (BSBO) charge that millions of migrating and federally protected birds, including an active Bald Eagle nest, will be threatened by an Ohio wind development currently under construction. The concern was raised in a letter sent this week to federal officials. 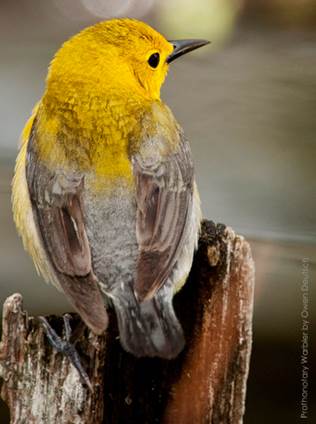 The groups say that a local business park is attempting to install six massive, 300-foot-tall wind turbines in the same area of Ohio that saw a single large Air National Guard-proposed wind turbine project shelved just last month by federal officials because that project did not comply with major wildlife conservation laws. The site for both projects is Port Clinton, Ohio, on the southern shore of Lake Erie.

According to the February 26 letter to U.S. Fish and Wildlife Service Director Dan Ashe, “… this wind energy project is being built by the developer, SUREnergy, with no Environmental Assessment (EA) or Environmental Impact Statement (EIS) ever being conducted, and with no consultation whatsoever with any state or federal natural resource agency. ABC and BSBO are concerned that this project represents an even greater threat to our public trust resources than the turbine that was planned for Camp Perry, and encourages the Service to look into this project in more detail, and take decisive action as appropriate.”

The letter says further that, “If this poorly sited facility is being built in the absence of any EA, any permitting process, or any consultation with state or federal wildlife authorities, then it clearly represents another failure of the current voluntary permitting guidelines to protect our public trust resources. Whether on public or private land, our native birds and bats are not owned by the for-profit wind industry, but are owned by the American people and held in trust for current and future generations.”

According to Dr. Michael Hutchins, Coordinator of ABC’s national Bird Smart Wind Energy Campaign, “We support wind energy development in places where impacts to birds and other wildlife can be minimized. However, these turbines are being built in one of the top five most important bird migration corridors in all of North America. The area is also home to the highest concentration of nesting Bald Eagles in the lower 48 states. It is likely not possible to dream up a worse scenario for birds, including threatened, endangered, and other protected species.”

“The geography of the region and the reluctance of migrating birds to cross Lake Erie before resting and feeding create a funneling effect for millions of North, Central, and South American migrating birds,” said Kimberly Kaufman, Executive Director of BSBO. “It is appalling to think that massive wind turbines can be constructed in these globally important bird areas without any wildlife review whatsoever. Projects like these are an example of the failure of our country’s voluntary guidelines to protect birds even in the most sensitive areas.”

ABC has created a Wind Development Bird Risk Map that shows the Lake Erie shoreline in Ohio is among the worst possible locations for a wind power project.  “Once again, it is hard to reconcile the wind industry’s claims to being ‘green’ when we see that the clear intent of some developers is to carry on without regard to impacts to wildlife and the environment,” said Hutchins.

ABC and BSBO led a petition campaign that acquired over 5,000 signatures in opposition to the earlier wind turbine project at Camp Perry. Together, they filed on January 8, 2014, a formal Notice of Intent to Sue the Air National Guard (ANG), charging that a proposed turbine in the area was being built in violation of several major conservation and wildlife protection laws, including the Endangered Species Act, the Bald and Golden Eagle Protection Act and the Migratory Bird Treaty Act.

A letter from the ANG Director of Installations and Mission Support agreed, stating that: “After carefully considering your objections … I have decided to withdraw the FONSI (Finding of No Significant Impact) for the project effective immediately. … Since the FONSI has been withdrawn, the project will not go forward at this time.” The letter was dated Jan. 28 and was signed by Colonel Peter A. Sartori, Director, Installations and Mission Support.

ABC and BSBO asserted that the placement of the project at the Camp Perry facility—and those proposed for the surrounding areas—presents an extremely high risk to migrating songbirds, especially the federally endangered Kirtland’s Warbler. This imperiled species was nearly extinct less than 40 years ago and, while rebounding due to costly and intensive management efforts, still numbers only in the low thousands. Additional birds at risk include other migrating songbirds, raptors such as Bald Eagles, Piping Plovers, and waterfowl. Also of concern to local residents is the possibility that projects like these may discourage birding tourism. Currently, more than 50,000 visiting birders inject $37 million into the local economy every spring.

ABC’s efforts to establish Bird-Smart wind energy in the U.S. are made possible in part by the generous support of the Leon Levy Foundation.

American Bird Conservancy (ABC) is a 501(c)(3) not-for-profit membership organization whose mission is to conserve native birds and their habitats throughout the Americas. ABC acts by safeguarding the rarest species, conserving and restoring habitats, and reducing threats, while building capacity in the bird conservation movement.

Black Swamp Bird Observatory is a 501(c)(3) not-for-profit whose mission is to inspire the appreciation, enjoyment, and conservation of birds and their habitats through research, education, and outreach.

Welcome to the KymryGroup™. We will be showcasing photography by several different photographers with a look in time from 1922 to the present. Share Business, Technology of Photography. Including adventures in the birding world and many other interesting insights and observations along the way.
View all posts by Kymry →
This entry was posted in Conservation, Environmental, Global Birding, Magee Marsh, Northwest Ohio and tagged American Bird Conservancy, Bird Migration, Birdwatching, Black Swamp Bird Observatory, KymryGroup, Wind Turbines Threaten Great Lakes Bird Migration Corridor. Bookmark the permalink.